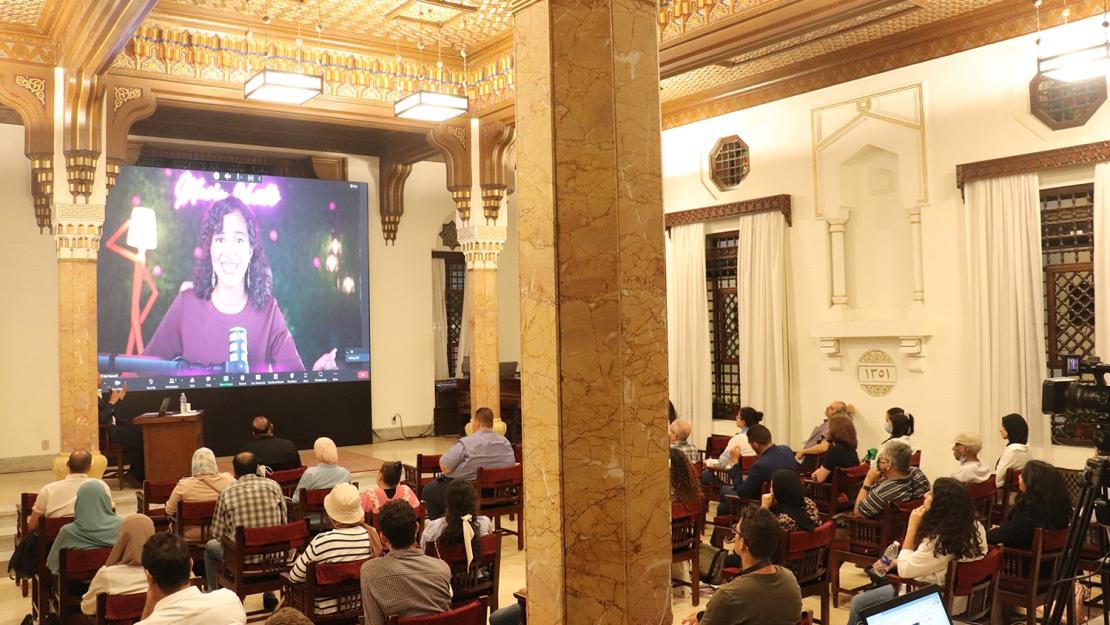 “Historians always think about change over time,” Dolan explained in his opening remarks. “So, I want you to think about what feels familiar, what feels different. [...] What I want to argue is that what we are seeing now is something different. But it’s part of a genealogy of the orient, ethnicity, and difference in American popular entertainment.”

The trifecta hybrid panel explored the nuances of each of the speakers through their personal and professional experiences. Mai reflected on the common struggle of growing up not seeing role models that look like her. She adopted her natural and universal language of comedy to share relatable everyday experiences that grew her millions of followers on social media.

“I started analyzing why it was doing so well. I realized I didn’t see a lot of women [or Arabs, or Egyptian-American women] in comedy. So I started to realize why people were craving that. From there, I never looked back,” Mai shared.

Later, Malaka and Denmo reflected on the works they created that highlight the uniqueness and acceptance of their dual identities as Egyptian-Americans. As Denmo puts it, “For me to have a holistic understanding of where I come from and are my ideas even my own, there is this longing to explore what came before me. That identity feels like this very fluid, moving conversation that has the opportunity to come through in creative work.”

In the final panel, Moon Knight culture and sensitivity consultants Rhonda and Ramy explained the shifting tide toward authentic and inclusive representations. “We were early on in the writers room. And instantly, I noticed how involved and intentionally [they] wanted us there. It wasn’t a check-the-box type of consulting that is generally requested,” Ramy said.

Historically, from feminist belly dancers, pop archeologists, and orientalist filmmakers to Black nationalists, Egypt remains a core area of cultural imaginaries of difference within a continuum of American representations that predate the republic itself. This dynamic and intriguing event explored the developments in recent years with increasing opportunities for Egyptian and MENA Americans to offer counter-discourse dedicated to more nuanced and authentic visions of Egypt.